The Pôle Finistere Course Au Large racers are selected on sports and professional criteria linked to their record achievement and to their motivation to work in a team.

How many boats racing Vendee Globe 2012 come from the Pôle Finistere ?

What are the working targets offered by the Pôle ?

Since two years, we have been working with our team members on several targets of work linked to navigation, weather, strategy, fitness and medical training. During the 10 training sessions, the skippers have sailed more than 3000 milles between Port La Foret and Gibraltar. Regarding the weather, we have worked with Jean-Yves BERNOT who is providing a complete Roadbook all around the world. This document is completed with a strong theoretical class to analyse the best way the subtleties of this particular competition.

What is the program of a training session ?

Preparing the Vendee Globe race, we have scheduled several training alterning sessions for speed tests and sessions more engaged targeting confrontations close to completion at day as well as at night.

So the content of a session is decided according to the weather conditions and specific goals as tries of same sails at same angles. It is mandatory that every skipper and his team can find in our sessions an optimal technical and pedagogical environment to enable a ranking with his partners and future competitors.

What are the contributions of such a centre ?

The value of an IMOCA project around the world is mainly hold by the skipper’s talent, his work and his ability to be surrounded with an efficient team.

Then, the value added of the pole is to offer a know-how exchange and some on-shore and off-shore information in order to be able to compare all the performance fields. For example, all the Adrena tracks, the photosand the videos of the trainings are available on the ftp servor. It is up to every crew to use the best way these data to be more efficient at the next session.

I also have to point out that every 9 skippers included in this trainings all come from the monotype Figaro path. Some of them have been working with the Pôle since 10/15 years.

So the Pôle’s value has to be rated according to the duration and not only on the trainings before the round the world.

Thanks to this long term « living together », there is a high confidence between the competitors and it helps raising the global level of the group. Every case study proposed by the trainers offers a sense and an interest that everyone understands and shares. 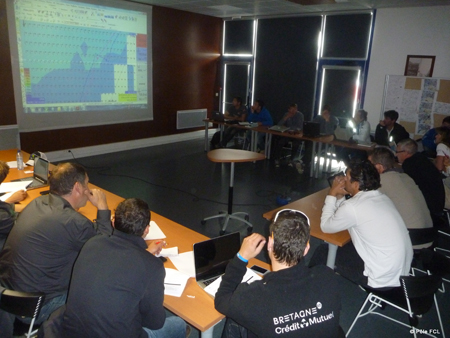 Do you think that from now, victory is managed from the chart table thanks to the navigation software ?

No, the sea is demanding a pragmatic approach, and the sailor background stays the main point managing performance and eventually victory on arrival line. Anyway, using a powerful software for decision making is mandatory to pretend to victory.

How one can be at the same time sparring partner and competitor ?

By splitting correctly the stakes between preparation and competition. By considering that the collective work is raising one personal level with more efficiency than if training alone. As long as the game is played like in real situation, we also can rate the reachable efficiency in every training situation (speed, boat handling, course…). As our group is homogenous, the best change from an exercise to another. So everyone has the feeling he can still learn from the others even if tomorrow his best partner will turn into his main competitor.

Sun Tzu, the art of war, VI century before JC

What weights 6g, is full of technology and that every sailor brings around the world ?

I didn’t realised that the Adrena software only weight 6g !

Some videos of training, here.