The sun is showing again and the air is warmer. It’s time to set sail ! The end of the year was rough but the new season looks promising. Let’s go back to 2017 best sailing moments and have a look on the events not to be missed this spring.

The end of the season has been full of adventure and emotion! Last November, we followed an exciting match on the 13th edition of the Transat Jacques Vabre.  Leading since the beginning of the race, Sebastien Josse et Thomas Rouxel (Edmond de Rothschild) finally gave away their place to Thomas Coville and Jean-Luc Nelias (Sodebo Ultim) on the finish line in Salvador de Bahia, Brazil. The tactical advice given by Christian Dumard, their router working on Adrena from land clearly paid off ! Another key moment of this edition was the farewell of french sailor Jean-Pierre Dick. After winning 1st place in the IMOCA class, he announced he would pass the helm of his monohull to Yann Elies, his partner. Towards new horizons…

In the polar cold of February, the 2nd leg of the Transquadra, partnered by Adrena, kept us on. The beginning of the race was quite hard for some competitors who suffered from injuries and breakages on their boats (a lack of training and preparation according to the race direction). The exceptionally bad weather conditions (strong rain and rough seas) did not help but all the fleet fought well and with passion. Winner of the 1st leg and in front since Madera, Alexandre Ozon and his Bepox 990 Team2Choc was the first to reach The Marina du Marin in Martinique, despite a broken rudder. Impressive! He was closely followed by Jean-Pierre Kelbert, also solo, and by the duo Monin/Belloir. All of them Adrena users!

2017 did not pleased everyone. After a false start by the end of November (he had to go back to the harbour following a breakage), Yves Le Blévec left the Quiberon bay to attempt around the World solo backwards record in a multihull. The challenge was huge and he was aware of it. While he was crossing Cape Horn at night, one of the trimaran’s port linkage broke, causing the ACTUAL Ultim to capsize. A great fright and a big disappointment for the team. And now? Time to bounce back.

Same disappointment for maxi-trimaran Spindrift 2. Led by Yann Guichard, the team tried to break the record of the Jules Verne trophy, but the adventure brutally stopped. After a false start on January 8th, their 2nd attempt was interrupted while traveling to the starting line at Ouessant when the boat dismasted. Huge disappointment for the crew who saw her dream of smashing Francis Joyon’s 40-days-odyssey vanish.

This year, Easter was celebrating at sea!

The Spi Ouest-France blew its 40th candles last week-end! 400 boats (among J/80, Diam 24, Multi 2000 or IRC boats with crew) were expected in La Trinite-sur-Mer, Morbihan, for a nice program of 5 regattas (coastal and windward/leeward races). The Adrena team, with software on board for half of the fleet, was there to assist the competitors in their tactical preparation. Despite the rough weather conditions, 174 races were held in a joyful atmosphere!

We are now waiting for the Transat AG2R La Mondiale to start. This month, the Figaro Beneteau boats will fight on the 3,400-miles circuit between Concarneau and the Caribbean island of St Barth. New rule this year: the race will count as a test in the 2018 France Championship offshore racing. Among the sailors expected on the start line: 2016 title holders Erwan Tabarly and Thierry Chabagny (Armor Lux), Gildas Mahé and Nicolas Troussel (Breizh Cola) or Tanguy Le Turquais and Clarisse Cremer (Everial). 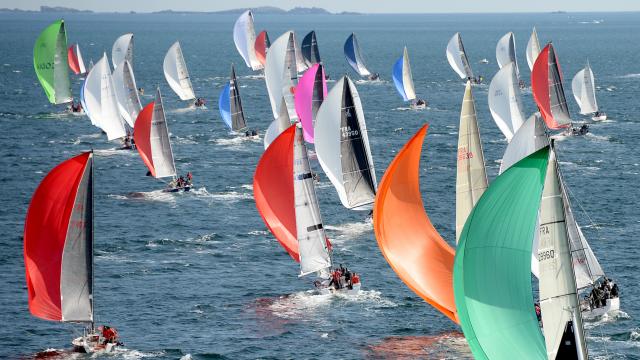 Another very exciting race that will take place this spring: the Nice Ultimed. The event will bring together, on the French Riviera from 25th April to 6th May, the elite skippers and the biggest sailing boats in the world. Thomas Coville (Sodebo Ultim’), Francis Joyon (IDEC Sport), Armel Le Cléac’h (Banque Populaire IX) and Yves Le Blévec (Actual Ultim) will be sailing an offshore sprint via Corsica, Sardinia the Balearic Islands and the coastline of the Région Provence-Alpes-Côte d’Azur.

The cream of the crop to make us wait before the Route du Rhum.

Finally, in May, we’ll not miss both SNT big events. First, the 8th Ar Men race edition from 10th to 13th May. Acclaimed by the world of sail, the mythical event is a racing nonstop, combining professionals and amateurs. The greatest sailing professionals will be giving their all on a 300 miles run in a week-end time. Later, from 18th to 27th May, the Mini 650 is not to be missed too! On the menu: a solo 500 nautical miles race between the Iroise sea and the Gironde Estuary. Beautiful !