Loads of races, successes but also disappointments. The ocean is full of surprises and hold the destiny of our navigators. Let’s see rankings of the month and upcoming races.

It’s already over! The Transat AG2R La Mondiale ended on Sunday May 13th after almost 13 days of competition. The 3890 nautical milles from Concarneau in Brittany, France, to St Barts, West Indies have not been so easy to sail and the fleet really took the measure of the challenge. Heading south was quite hard until Spain. Three duos were forced to abandon due to dismating. Passing Madeira, the fleet then splited in two, with a leading group in the North and another in the South. The race took a big turn when Adrien Hardy and Thomas Ruyant (AGIR Recouvrement) and Anthony Marchand and Alexis Loison (Groupe Royer – Secours Populaire) – the front-runners in the North -joined the South group for the big Atlantic crossing. After 18 days, 11 hours, 48 minutes and 22 seconds of sprint, the duo Hardy/Ruyant was finally the first to cross the finish line. But they were closely followed by Simon-Lagravière (Bretagne CMB Performance) and Mahé/Troussel (Breizh Cola). The ocean giants, all of them Adrena users, won the battle over this particularly demanding edition. 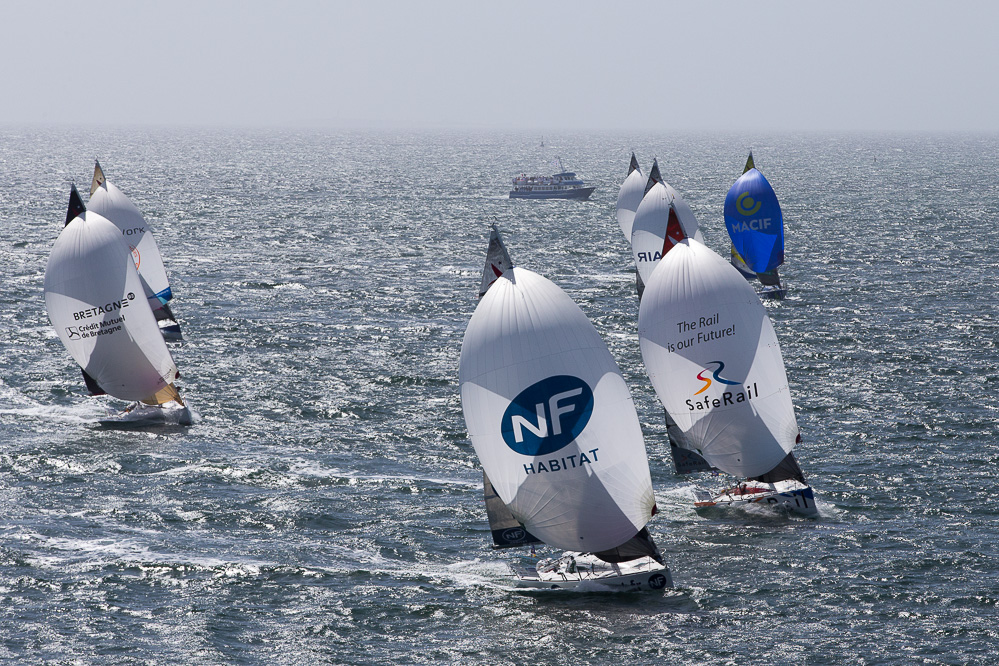 The 42nd edition of the Solo Concarneau – Trophée Guy Cotten was a charm. A good race organization, a challenging weather and competitors eager to fight. On the podium, Anthony Marchand (Royer – Secours Populaire Group) with 255 nautical milles covered in 1 day, 16 hours and 41 minutes and the duos Yann Eliès and Julien Villon (St Michel),  Gildas Mahé and Nicolas Troussel. A perfect training session for those professionnals, expected to take part in the biggests competitions of the summer.

Nice Ultimed : a success despite some disappointments

With the catching « Clash of titans » slogan, the brand new race promised us a battle between the outstanding offshore french racers on Ultim boats through the Mediterranean sea. Earlier in the season, we were told that François Gabart (MACIF) and Sébastien Josse (Maxi Edmond de Rothschild) would not take part into the event. A few days from the departure, while sailing to the Mediterranean sea, Armel Le Cléac’h and his Maxi Banque Populaire IX capsized off the coast of Morocco. If no one got hurt, the boat was damaged and had to quickly return to Concarneau to recover before The Route du Rhum. Missing some of its champions, the race started in light weather conditions. Ultimate twist of fate, a few hours after setting sail, it was Yves Le Blévec with his Actual-Grand Large Emotion who announced his retirement because of a rig damage (broken hydraulic ram). The competition continued and ended 3 days later, after a duel at the summit between Francis Joyon (IDEC SPORT) and Thomas Coville (Sodebo Ultim’)  who took the win with his crew.

If NiceUltimed knew some disappointments, the event was a huge success. Our congratulations to the race manager and the whole team who contributed into democratizing our sport, notably through opening the race HQ to the public and allowing him to follow the competition on giant screens with Adrena.

The beginning of the summer will be marked by the Golden Globe Series, organized by the Yacht Club of Monaco. The biggest offshore skippers will fight on a very demanding 1300 nautical milles course around the Mediterranean sea. Boris Herrmann, who told us earlier about his use of Adrena on Malizia II, Louis Burton (Bureau Vallée), Paul Meilhat (SMA) or Isabelle Joschke will need to make good decisions to cope with the Mediterranean weather and make the difference. Interesting to note : the competition will count as a test for the Vendée Globe race. It’s going to be intense!

In Marseille, from June 3rd to 10th, the finale of The World Cup Series is not to be missed. After fighting in Gamagori (Japan), Miami (USA) and Hyères (France), the world’s leading sailors will compete for a very last battle. In St Tropez, the iconic Giraglia Rolex Cup will also captivate us. On a week long, the most beautiful Maxi boats and cruisers will race on a circuit starting from the St Tropez Bay, passing through the island of Giraglia (Corsica) and finishing in Genoa (Italy). What else?

Accross the Channel, a bunch of Royal Ocean Racing Club races will be held. Organized by the SNT (Société Nautique de la Trinité-sur-mer) and partnered by Adrena, The Trinité-Cowes race (July 9-12) will offer the best sailing moments on a 350 nautical milles course. Other big event of the summer, the The Cowes- Dinard – St Malo, which is one of the oldest events in the RORC, will combine challenging racing and chilled out cruising among the beautiful Channel islands. Race starts on july 13th.

Later in June, we will follow the new edition of the Newport Bermuda Race and keep an eye on the Young American Big Boat Sailing Team, partenered by Adrena. The participants of the biannual race from Newport (Rhode Island) to Bermuda will compete on a 635 nautical milles circuit!

Finally before July, we will not miss the Duo Cat Armania race. The SNT is planning a beautiful sport event on the water with a double-handed competition divided into legs throught the coasts of Piriac-sur-mer, Pornic, Port-Joinville, L’Herbaudière and Le Crouesty. Adrena team will be there to advise the sailors!