If you want to make the most of Adrena and Octopus software and analyse your boat performances, you need to make sure your instruments are properly calibrated.

Adrena’s calibration tools analyse data collected by the navigation system sensors and inform you of the errors.

The principle of this alignment consists in sailing a run on the starboard tack and then, on the port tack. The program measures the upwind angle on each tack, filter them to calculate and apply an offset.

You can also start with the port run if you prefer. You can also do several successive runs on each tack to sharpen calculations.  It is not necessary to proceed to the same number of runs on each tack, and they can have different duration.  Carefully adjust the boat settings, in exactly the same way, on both tacks.

It is advised to proceed with calibration during calm seas and constant wind. Effectively, even if the program averages the wind variation, the helmsman’s reactions to the wind changes are usually different on the port or starboard tacks. This could result in an asymmetric effect from one tack to another, which could affect the calibration. 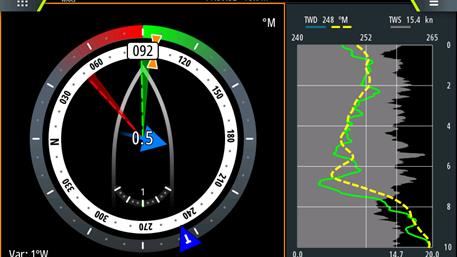 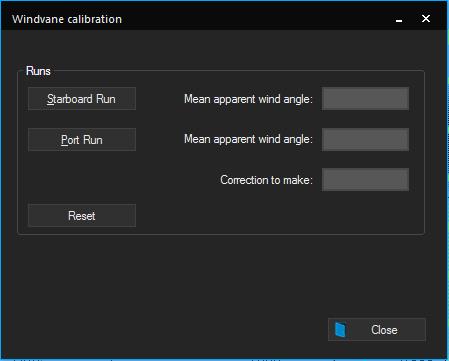 The program directly indicates the correction to make in your navigation system (no need to divide by two).

To avoid these mistakes, it could be wise to reset the windvane calibration to 0, before doing the calibration runs.

Calibration of the speedometre and compass

The Speedometer can be very easily calibrated with the software. This is accomplished by doing between one and tree runs (from ½ to 1 mile), under engine and in the axis of the current.

As the program does these calculations based on average speed and not distance, the distances covered during the different runs, do not need to be identical.

It is advised to proceed with calibration in calm sea conditions and while avoiding strong crosswinds. Head wind has no incidence on the calculations.

It is not necessary to have any fixed marks (buoys as marks) the program is set on the GPS position.

The compass alignment is done in exactly the same way during the same run(s) . Do not forget to adjust it before, if you think that it might be subject to magnetic influence. Most navigation systems enable it to be done, either automatically, or after several boat rotations on the spot. The value of the magnetic variation, necessary for the calculation, is automatically calculated, whatever your navigation area in the world is. 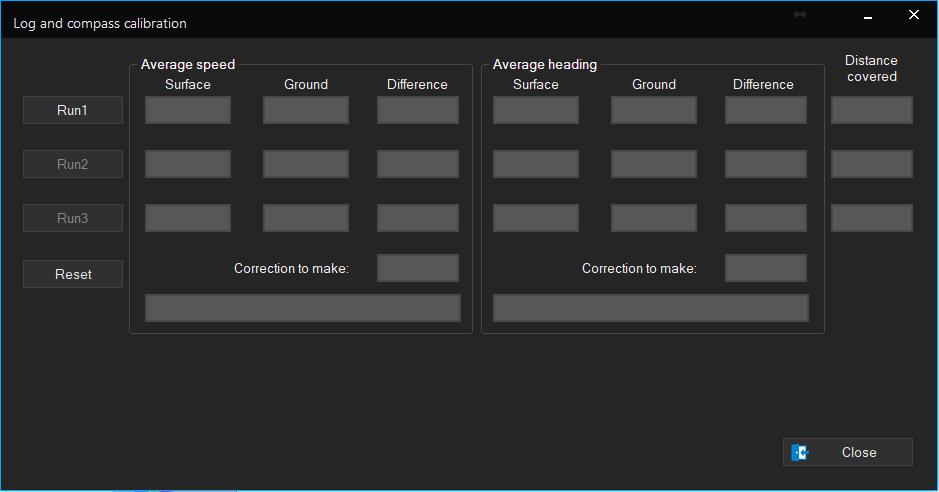 Speed up the boat with the engine (the higher the speed is, the less influence the current has) facing or with the current aft, if there is any, click on “run1”. After covering about ½ mile, click on “end run1”.  The first run is over and the program informs you of the corrections to apply to the speedometer calibration and the compass alignment. If you consider that there is no significant current (less than 0.1 knots), the calibration is completed; otherwise, proceed with the 2nd run:

If you consider that the current has not changed between the two runs (less than 0.1knots variation), the calibration is completed; otherwise, proceed with the 3rd run:

Do a U-turn, click on “run3” and follow the same course covered in run1.  Then, click on “end run3”. The program informs you of the correction to apply, taking the current variations into account this time. The calibration is completed.

You can now transfer these values into your navigation system.

Caution: If calibration is already in the navigation system, the correction must be applied to the preset calibration.

To avoid errors, it is advised to set the speedometer calibration to the average value before proceeding with the calibration runs.

Using Adrena calibration tools will help you to avoid errors when calculating polars or exploiting the laylines.